Although the event reverted back to its traditional slot of early August, it was also on the same day as the Bristol Motor Club’s AutoSolo.

While the AutoSolo didn’t use the track itself, we had to look at the logistics of the Tuition & Track Day as most of the paddock would be off limits to us. This included return routes from the Scrutineering bay and the exit route from the track. Through liaising with the circuit, we managed to find suitable routes to keep the Tuition & Track traffic away from the AutoSolo event. However, due to the reduced paddock space, we played it safe and did not have the Bristol Hot-Rods on show as in previous years.
Tickets to the 2012 Tuition & Track Day went on sell to Bristol Pegasus members first in December 2011, with the tickets being released to non-members the following April. The Mini Cooper Register took 15 places at first but their interest increased as the event neared.
I will take this opportunity to welcome members who took up the offer of joining the Bristol Pegasus Motor Club as part of their entry, hopefully you will experience more events during the club calendar.
It had to be said that the take up of the tickets for this year’s event had been quite slow. I put back the closing date by two weeks to capture more interest. But by the beginning of August all tickets had been sold. Speaking to Castle Combe officials on the day, it seemed that we had been quite fortunate as there had been many track days during 2012 which had very low take up, some events only having as little as 15 cars. It would seem that the global meltdown as having an effect of motor racing, or it is just the price of fuel!
Following the brilliant (?!) summer that we have been experiencing, we were lucky with the weather on the day. Although it did also fall on the Saturday of the Bristol Balloon Festival weekend, this being notorious for bad weather, the early morning mist lifted to give perfect weather for racing. The following morning was another story, with a massive thunderstorm hitting us, sorry balloons!
I picked Phil Harris and Tim Murray up early in the day with a car packed with traffic cones, fold out chairs, a huge pack lunch and a bottle of sun tan spray.

This was the first year of using the Kay Thomas Centre for both signing on and for the briefing. There was a queue at the door of the signing in area before we even had chance to get ready. A good sign for a full queuing area for the first run at 9am. However only 4 drivers were on the first batch to leave, were the rest having a ‘Big Boy Breakfast’ in the Tavern?

We used the wider track-side pit lane for arranging the cars prior to release onto the track. This worked very well, as we could leave up four lanes all day.

The cars entered this year gave a refreshed array of vehicles, including a total of 19 Minis, 9 Westfields, 4 Porsches, 3 MGs and a cluster of other vehicles. 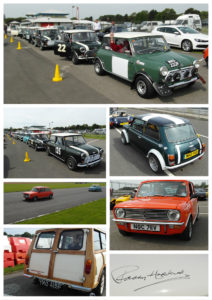 This gave a rare collection of Minis in one place, which was a real treat.

As with most years, they would fight to be in a group of seven so they could have a run of just Minis. Me being me, of course they could play together! 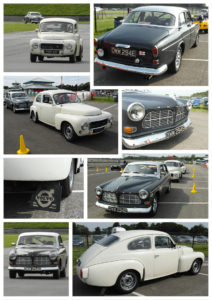 We also had other wonderful classic cars entered. Two suburb Volvos; a 1967 Amazon and a left hand drive 1966 PV S44. 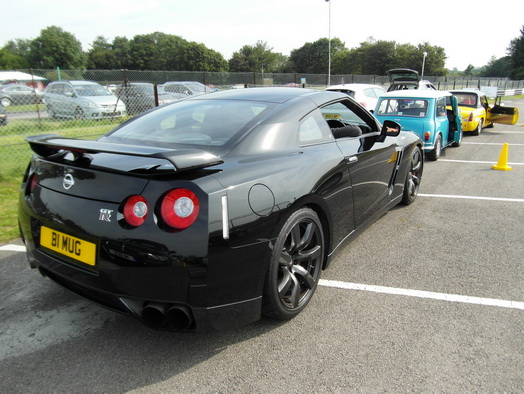 The Tuition & Track Day always brings out some unusual combinations of cars; I particularly enjoyed seeing the
massive 4.6 metre long Nissan GTR with its [roughly] 500 BHP sat behind a Morris Cooper S. You could almost see the Nissan licking its lips as it waited behind the Mini. 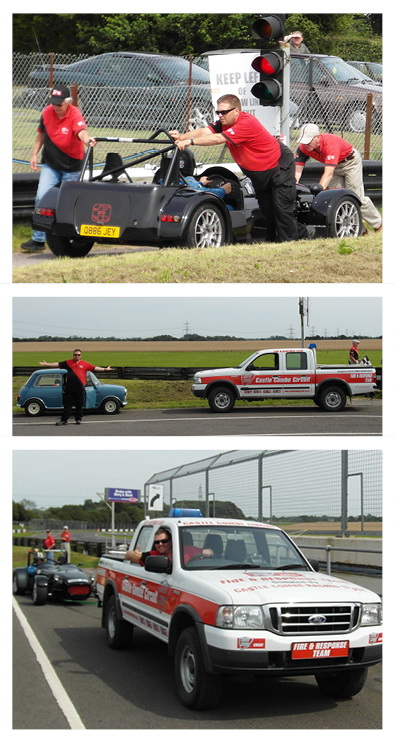 Within the first half hour on track, a yellow Westfield lost its fan belt as it passed the pit area – which almost fell into the hands of one of the circuit officials. The Westfield somehow continued for half a lap before conking out. The second Westfield related incident was an hour or so afterwards which ground to a halt as it passed the pit area, with what I believe was an oil pressure issue. Some quick manoeuvring and shift pushing from the circuit staff got the car off of the track with minimal fuss.

The day went very smoothly with just a lone car on it last lap left on the track which caused a red flag and a bonus
lap for next batch of cars. The revised circuit exit flow worked well and we were back on track (if you pardon the pun) straight away.

The only other occurrence was when a Mini squealed, lurched and suddenly came back up the track entry slip the wrong way. I did ask what the problem was, gearbox issues I think.

I heard a few crackles over the radio when an odd car spun and continued. My favourite being the Honda S2000 losing it on the exit of Camp Corner and travelled sideways until it came to a halt in Chippenham town centre. 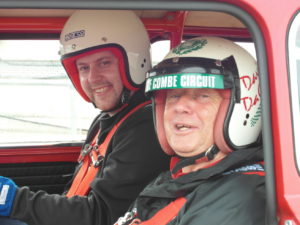 The Castle Combe Racing School Instructor, Dave Da Costa, was extremely busy during the morning. There was a queue of four cars awaiting instruction at one point. Regardless of what car he was instructing from, he would fly out of the pit area with smile, or was gritted teeth?

I took the opportunity during the hour lunch break to check out the main paddock and other cars that seem to be visiting. I found a rather nice Ford GT40, a rally prepared Cooper with all the trimmings and a ‘Cooper’ service van.

around half three we started on the extra runs and managed to get 27 cars out on extra runs before everyone ran out of steam. With an empty pit area, we thought ‘This is new….’ and we decided to call it a day at 4.30pm. This we took as a complement that everyone enjoyed themselves. 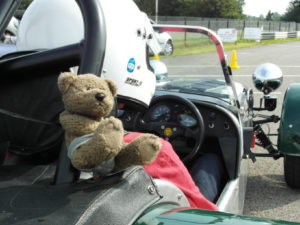 Many thanks to Phil Harris and Tim Murray for their help on the day. Also to Graham Robinson of the Mini Cooper Register for coordinating such a terrific collection of Minis. And a big thanks also to Alan Jenkins, Adrian & Nicki Fawdington and the rest of the Castle Combe marshals & officials for their excellent management of the circuit.

We use cookies on our website to give you the most relevant experience by remembering your preferences and repeat visits. By clicking “Accept”, you consent to the use of ALL the cookies.
Do not sell my personal information.
Cookie SettingsAccept
Manage consent

This website uses cookies to improve your experience while you navigate through the website. Out of these, the cookies that are categorized as necessary are stored on your browser as they are essential for the working of basic functionalities of the website. We also use third-party cookies that help us analyze and understand how you use this website. These cookies will be stored in your browser only with your consent. You also have the option to opt-out of these cookies. But opting out of some of these cookies may affect your browsing experience.
Necessary Always Enabled
Necessary cookies are absolutely essential for the website to function properly. These cookies ensure basic functionalities and security features of the website, anonymously.
Functional
Functional cookies help to perform certain functionalities like sharing the content of the website on social media platforms, collect feedbacks, and other third-party features.
Performance
Performance cookies are used to understand and analyze the key performance indexes of the website which helps in delivering a better user experience for the visitors.
Analytics
Analytical cookies are used to understand how visitors interact with the website. These cookies help provide information on metrics the number of visitors, bounce rate, traffic source, etc.
Advertisement
Advertisement cookies are used to provide visitors with relevant ads and marketing campaigns. These cookies track visitors across websites and collect information to provide customized ads.
Others
Other uncategorized cookies are those that are being analyzed and have not been classified into a category as yet.
SAVE & ACCEPT
X